So, I was clearing out some blog drafts and I came upon this one from August 28, which was about two months after I started dating Joe.

A few things have changed since then. I’m 32 now. I have bangs. Joe and I have met each other’s families and made each other meals and agreed that we want to share the same balcony from the same apartment. But for the most part, this draft still holds true.

I’m publishing it today as an ode to a balanced, imperfect relationship. One that I want to keep.

Warning: it’s a little gushy and it’s totally something I would have hated (secretly loved?) reading when I was single.

File this one under the category, “Things people say to you and you roll your eyes, but then later you realize they were right.”

At 31, I’ve had a good number of dating experiences. I’ve had a long-term, loving relationship that just didn’t work out, and a series of shorter-term relationships that have ranged from from fun to serious, to confusing to honestly-I-can’t-believe-you-thought-I’d-like-that-movie.

But the key marker in my adventures is that they’ve all been complicated in their own ways. However compelling, there’s been a problem to be solved.

My friends and family have been relentlessly supportive of whatever and whomever I chose, but often with the gentle sighing caveat, “You know, I really think it should be easier.”

It should be easier.

That’s a particularly easy statement to ignore, because it can be intellectually overridden with facts about why it’s hard now but will get easier later, or snorts that maybe not everyone gets to glide down easy street in the beginning of a relationship. It just sounded too simple, and I truthfully figured that “easiness” just wasn’t in my nature. I enjoy complicated tasks – things that need to be untangled and wrangled and sorted out.

But that was before I met Joe.

That’s not to say it’s perfect. His cheap, black socks leave little fuzzies all over my apartment, and I swear they look like dirty spiders and it drives me freaking crazy. And my work life often bleeds into my after-work life, and I know I have a hard time disengaging when I’m focused on a project.

But. It’s easy. We like each other. He’ll buy new socks and I’ll turn off email notifications. He’ll teach me how to love cycling and I’ll teach him how to think performance art is beautiful (some of it, at least).

I’m not writing this to say that something’s wrong if your relationship looks or sounds different. If it doesn’t seem easy, it’s still okay. You’re the only one who knows what’s right for you.

But from one logical justifier to another, it’s been SO worth trying for easy.

Also, we met on Tinder. 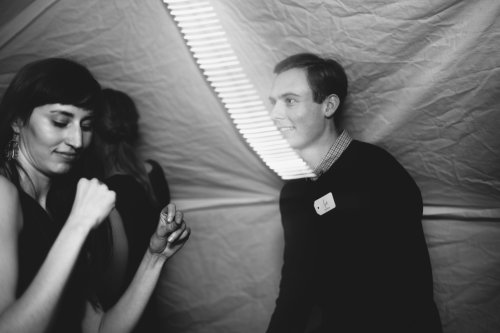 The only photo of us from my work holiday party.
Captured by Colleen at 2nd Truth Photography.