It’s been fifteen days since Mars came into the world. He arrived in a dimly lit room to the soft murmurings of a practiced nurse and the wide-eyed amazement of my husband, Joe. Mars’ actual birth was, for the most part, smooth and efficient. I pushed like I dance – specifically and brainily. Hyper-focused on the instructions and compliant with critique. Unaware of the tearing. Unaware of the bleeding. Only aware of the release and relief I felt as they slid my son onto my chest and Joe cried for the first time since I’ve known him.

In that moment, we blasted ourselves out of the quiet, restless limbo of a late-term pregnancy into the strangest time warp – where we’re rocketing through the days, barely blinking, but the minutes themselves are both beautifully and excruciatingly long.

It’s been a shock to every system.

Some of our parent friends tried to explain the newborn experience to us before Mars was born. They told us it would be amazing and tiring. They said things like, “Prepare to never sleep again lol” in that glib-but-I’m-serious way that made me uneasy. They gave us advice. And promptly told us to ignore their advice because babies are individuals and it’s impossible to predict what they’ll be like.

These last couple weeks have been HARD. Not hard like physical exertion or hard like grief, but there have been, honestly, elements of both. This hardness draws on aspects of every other hardness out there and then reaches straight into your center and pulls out a deep, aching love. It’s a love that feels like hope and terror and exhaustion all at once. This love physically intertwines two rapidly changing bodies – both of them in recovery and both struggling to keep up with life’s new demands.

I’m in awe of every mom who’s ever lived.

In the midst of the hardness, things that might seem small and insignificant are amazing and enormous. His first poopy diaper! His obsession with windows! My first post-partum bowel movement! (Real talk: pooping after birth is its own, special kind of labor.) I’m not kidding when I say that the first time we breastfed and I didn’t grimace and whisper curses into the night felt like the day I completed my graduate thesis. (FYI, we are back to cursing. This is an ongoing saga.) And some things are ridiculous and delightful, like when I catch Joe, covered in pee and laughing, congratulating Mars on a surprisingly strong spray.

We think everything Mars does is interesting. Every sigh. Every grimace. We’re proud of his new folds and rolls, tickled by his punches and kicks, and wrecked when we can’t calm his shuddering cries. He’s a mystery to us – but it’s our job to know him, so we keep waking up and trying our best. And the next time we see just a hint of a smile, love will come bubbling out of our throats and make the nighttime curses seem a little less potent. 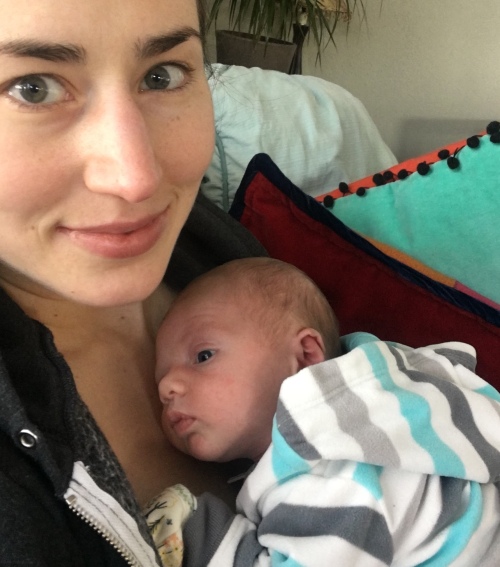