My best friend from graduate school is coming to visit me from New York tomorrow and she asked me what to pack. Rather than send her a list broken up between eight separate text messages (with some “xoxoxo’s” peppered in for good measure), I’m sending it to her blog-style.

1. Your warmest coat. Unlike everywhere else in the country, it’s the middle of winter where I live. In fact, it’s been winter the entire time I’ve had this blog. The. Entire. Time. I’m both giggling and crying as I write this.

2. Wine. I tried to get some in preparation for your arrival, but I left my ID in my other coat and the guy at Kowalski’s wouldn’t sell me any without it. My incredulous and wide-eyed, “But I’m thirty!” didn’t phase him one bit.

3. Yoga pants. Obviously we’re going to dress up like we’re going to yoga, whether or not we actually go. We can drink the wine you’re bringing instead.

4. Dancing shoes (sneakers). I’ve compiled a long list of all the dance nights happening around town throughout the week. If we plan on going to all of them, we’ll make it to at least one. I’m itching to do the Roger Rabbit on a Wednesday.

5. Skim milk. This is a soy milk household. (Just kidding; I already picked up some skim. But I do think it’s gross, so you’re going to have to drink the entire carton by yourself.)

6. Those magical heat-emitting hand-warmer thingies you can put in your pockets. See number 1.

That’s pretty much it. I have towels and Girl Scout cookies for you.

See you at the airport!

*This list can be adapted for anyone visiting the Midwest in March. 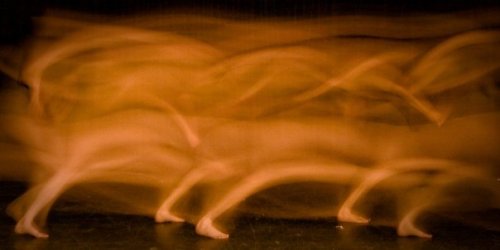 That’s the two of us, running. Photo by the very talented Andrew Ippolito.