Here are eight ways to to be a good neighbor in a Minnesota winter:

1. If you’re outside walking and someone near you slips and falls, don’t ask them why they’re wearing Uggs. Just help them up, acknowledge the slippery surface and assure them that there were no other witnesses. If you’re really feeling generous, go ahead and take a fall yourself. As long as neither of you breaks any bones, you might make a new snow friend.

2. Try to convince the tow truck driver that moving your neighbors’ snow-zone-parked cars to the other side of the street is a more efficient use of time than towing them away. It’s not, and you’ll be told to scram. But at least you tried.

3. Sitting inside your warm apartment, drinking tea and watching the college student across the street try to spin her Ford Fiesta out of a snow bank is only fun for so long. Put your coat on, get out there and give her car a good shove before she yells, “Mother f**ker!” one more time.

4. If you’re stuck in the snow wishing you’d banked some better Karma by pushing the Ford Fiesta out sooner (and no, Karma doesn’t work that way), be patient and try not to swear too much.

5. When trying to befriend the mail carrier during a blizzard (which, if you’re a freelancer, you should know not to do by now), try not to say things like, “Wow, it must be awful to be out there all day!” It is. And since you’re inside listening to holiday music in your pajamas, your take on the situation isn’t really appreciated.

6. When someone helps you detach your vehicle from clingy snow, press the gas, roll down the window, yell, “THANKS!” and keep moving. Whatever you do, do not stop the car. The helper would rather see you free as a bird and rolling down the street than be thanked by you face-to-face, stuck five feet from your original location.

8. If your landlord plows your parking lot three times in 24 hours, thank him profusely and resist the urge to be irritated by the number of times you’ve had to move your car. You’ll appreciate being able to get in and out of your spot for the next six months. 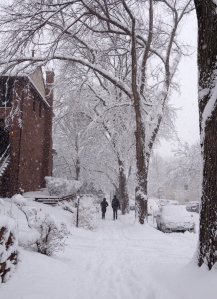