As a not-purveyor of apocalyptic information, I thought the end of the world was on 12/12/12. My bad.

Since I’ve been informed that it’s actually tomorrow, I came up with a list of items I will take with me into the imaginary bunker I imaginarily built in the basement of my apartment building. Then, I will imaginarily emerge from my bunker on 12/22/12 to find peace and happiness abounding. That’s how apocalypses work, right?

At least three pillows of varying sizes. There’s no point in lounging around in an imaginary bunker if it’s not comfortable.

My George Winston December CD and the discman I’ve been keeping in my desk drawer for just such an occasion. It will be comforting to hear the skip-whir of the disc under the sweet piano tunes, and the odds are that my iPhone won’t be working because I wasted the battery refreshing Facebook.

Thin Mint-flavored Girl Scout Lip Smaker. I ran out of cookies like six months ago, so the waxy lip stuff will have to do.

More pillows, in case someone visits me and wants to borrow one.

“The Man Who Mistook His Wife For a Hat,” by Oliver Sacks. It’s interesting, touching, funny and much scarier than an apocalypse.

Brian Boitano. He’s very resilient (most recently, he survived a flip and a flop in my sink when I accidentally poured him out of his bowl), but I’d prefer not to leave him alone above ground.

A roll of quarters. If money loses its value entirely, at least I can play more games with quarters than I can with a ten dollar bill.

Which reminds me… Pogs. I need to find my Pogs. 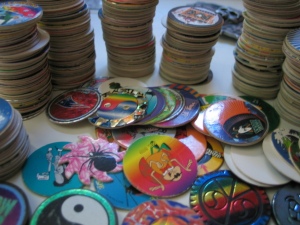